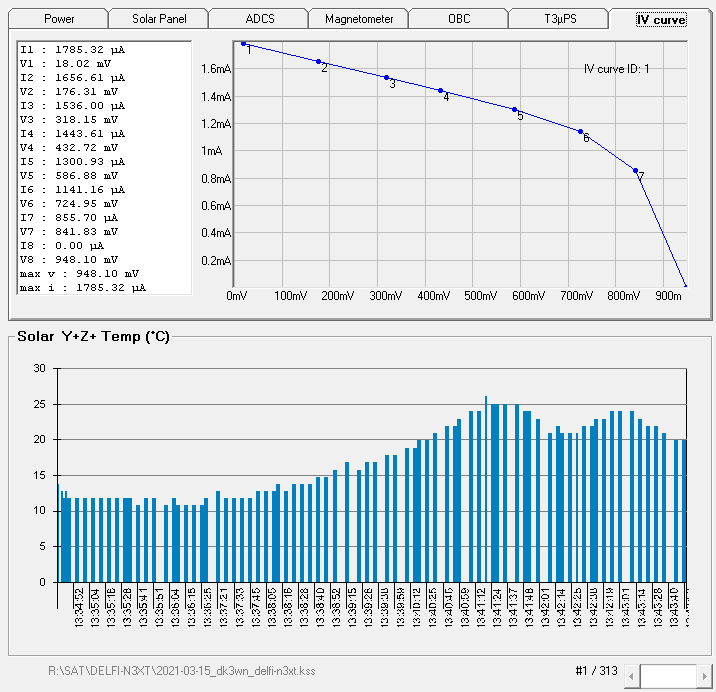 It has been a while since you heard from us. We are still having problems to receive our satellite since our transponder test. We now want to try something different: trying to activate our S-band transmitter and let it transmit at full power for a pass. If we are able to receive a signal from the S-band, we know that Delfi-n3Xt still has an operational receiver and we could potentially demodulate the S-band signal. But since we already know that the latter is difficult, the first focus is just to “see” the signal. Since the satellite is still tumbling, it is a matter of link budget and statistics if we are able to catch the signal. To increase our chanceswe would like to ask the help of radio amateurs in the neighbourhood with suitable equipment. Since we have to actively command the satellite we have planned the passes which are suitable for the Netherlands, Germany, Belgium and Northern France and the availability of operators from our side. According to a quick survey, you are living in the area in reach at the selected passes. The question to you:

Do you have S-band (2405 MHz) reception functionality with a dish of at least 2.5 meter and tracking capability and willing to follow and record one or more passes for us?

If so, please let us know your location, the gain of your antenna and the passes you are able to follow. Off course you do not have to be actively present during the pass. You can just record it and send the recording later through www.wetransfer.com.

Delfi-n3Xt will send at 2405 MHz +/- 100 kHz. The latter is the worst case uncertainty band, but I expect it to be pretty close to the right frequency. If you have an SDR, you can best set it at +/- 1 MHz around the centre frequency. Off course you do not have to be actively present during the pass. You can just record it

The planned attempts are stated by the UTC time of commanding below. If successful transmission would be within the 10-20 minutes after the indicated time.

If you are able, your help is highly appreciated!

Unfortunately, we have not heard anything from Delfi-n3Xt since Thursday 20/02 after our transponder test. During the transponder test we could hear our side beacon at 145.870 MHz and we were still able to switch back to normal transmission an back to transponder again (and also received the beacon the second time). Nothing seemed to be wrong, except for the transponder itself not properly working. The satellite was supposed to return to nominal operations in the next orbit.

We think that a hardware failure occurred either at the second half of the transponder orbit or during the mode switch. Since Friday we have made many attempts to revive the satellite. Since we have an independent radio, there was (and still is some) hope to get the satellite back in transmission. There are however a few points were common mode failures could occur: the phasing circuitry which connects both transmitters and an I2C buffer at the main bus side. We do however still have some hope that only one radio has failed and that we might still be able to command the satellite to use the other. Since all trivial command schemes did not work, next week we will only focus on a specific test to turn the transmitter on for a brief moment. During the weekend we saw some narrow band signal at 10 kHz below 145.870 MHz (+/- Doppler), which might potentially be related to the local oscillator. If we can reconstruct this a few times and clearly correlate this to Delfi-n3Xt (we do have a lot of intermitting noises sources in the neighbourhood) we at least know the the OBC and one radio is still working and we can commence to next steps.

We appreciate everyone’s help to listen to Delfi-n3Xt to see if there is still some signal left. I think the best changes (besides Delft passes in which we try to command) are when the satellite comes just out of eclipse and is supposed to startup one of the transmitters. Please note that it has become very crowded with CubeSats lately, so any signals which are off in frequency (except for the -10 kHz tone), have a very different bandwidth and/or Doppler shift are very likely to be other satellites in the neighbourhood. Today we had for instance Delfi-C3 almost perfectly aligned sending at the same frequency. Delfi-n3Xt will only transmit at about 145.870 MHz.

I the situation changes, I will provide you with an update.

No signals received from Delfi-n3XT after the transponder tests.
The ground station is trying to solve this. If you hear signals from Delfi-n3XT please send them a message. Dear all,
Today we did a first transponder test. We could hear the beacon, but unfortunately did not hear anything back from our calls. Also we were missing the noise floor of the transponder band. Our hypothesis is that our adjustable LO (Si570) which is mixed with the IF band could not be programmed correctly and hence the pass-band goes outside our filtered band (which is a good thing, because we do not want to transmit on illegal frequencies). This LO is adjustable by I2C communication and should be programmed each time at power up (so each time the transponder mode is activated. We will do two attempts more tomorrow at the morning ground passes and even if that doesn’t help we will keep on trying with different settings. If the situation changes I will update you again.

We are going to test the transponder functionality of Delfi-n3Xt this week. I have to be honest that this functionality was implemented last minute on the satellite and was only tested briefly in a non-representative setup. I therefore estimate the chance that it will work at 50/50.

Our first test series will be:

After a few initial tests, and provided that it works, you are free to use the transponder for communication. We will leave it in this mode for the remainder of the sunlit part of the orbit, so only in Europe and Africa it is possible to use this mode for now. If successful we will turn on the transponder more often and for longer periods of time such that everyone can enjoy it.